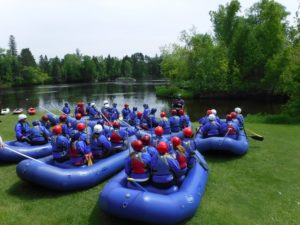 If you’re going on a high adventure trip, you want to know that you can trust and depend on your guides. That’s why at Swiftwater, we feel it’s so important that our owners are also guides. In fact, one of them is on every trip that we run. This allows us to provide the most fun, most informative, and safest experience possible.

You see, guiding whitewater isn’t a commodity that can be bought. It must be earned through years of paddling, training, and running different sections of river, often across the United States and beyond. Sure, it might be possible to bounce down the river not knowing what you’re doing, but it’s the skill gained through years of experience on all levels of whitewater that allows us to show our customers a great time while keeping them safe. You have to know how to get it right, but it takes years of experience to know how to handle things when it doesn’t go according to plan.  As you’ll see below, our owners have devoted their lives to paddling whitewater and learning lessons from mother nature.

Swiftwater Adventures is the brainchild of our founder, Cliff Langley. In 2014, he had a vision to continue providing wilderness/whitewater experiences to the people of Minnesota and beyond. I say ‘continue’ because Cliff Langley had previously guided on the St. Louis River for over a decade before the closure of Superior Whitewater. Not content to let the experience of whitewater rafting near Duluth, MN fade away, he decided to form a company that would provide both a wilderness AND whitewater experience. This point is one that sets us apart, and one that Cliff feels strongly about. People coming to see us will get an awesome ride, but also an immersive experience in nature, often learning about the flora, fauna, and geology of the area. Did I mention that Cliff holds an advanced degree in Natural Science and Environmental Education? We think he’s pretty smart! Aside from paddling the rivers of Minnesota, Wisconsin, and Michigan, he’s spent the last 20 years guiding and paddling in the Rockies, Alaska, Canada, and Central America. In short, he’s the kind of guy that will make sure you have a good time, stay safe, and come away having learned something about the natural world, and maybe even yourself.

Lucas Aker was born on the shores of the St. Louis River just outside of Duluth and was baptized in the whitewater of the river at an early age. He started paddling at age 13, and guiding for Superior Whitewater at the age of 15, working over 20 years before starting Swiftwater. As a young paddler, he learned from the elders in the community by paddling the rivers of the north and south shores of Lake Superior. Luke grew up camping, fishing, hiking, paddling, and exploring the wilderness, and as an adult, he continues this lifestyle. In addition to guiding tens of thousands of people down the St. Louis River, he spends his fall working in the woods and swamps of Northern Minnesota. What I mean to say is that nature is his natural environment and where he’s most at home! Always a student of people and the planet, Luke spends his winters exploring the globe, concentrating on Southeast Asia over the last decade or so. His broad experience with paddling and people of all kinds makes him a great asset.

Brian Pfeifer was raised in Northern Minnesota’s iron mining region—the Iron Range. Surrounded by wilderness and growing up on a lake made for an inescapable love affair with the woods and water. He has been paddling the rivers of Minnesota and Washington for over 10 years, also guiding with Cliff and Luke before forming Swiftwater Adventures. In the off-season, Brian teaches music at the University of North Dakota. To deal with the long winters on the prairie, he builds furniture and other woodworking projects using only hand tools. Most important to him and his wife Carrie, is passing on the feeling of deep connection with the forces of nature gained through whitewater to his three sons, Michael, Collin, and Henry.

If these brief resumes weren’t enough, Cliff, Luke, and Brian are also certified Wilderness First Responders/First Aid, BLS certified, and swiftwater rescue trained. Being able to trust your guide is the most important part of a rafting trip. Choose Swiftwater for your next adventure and know that you’ve made the right choice! And come say hi to us on your next trip, we’re friendly people!