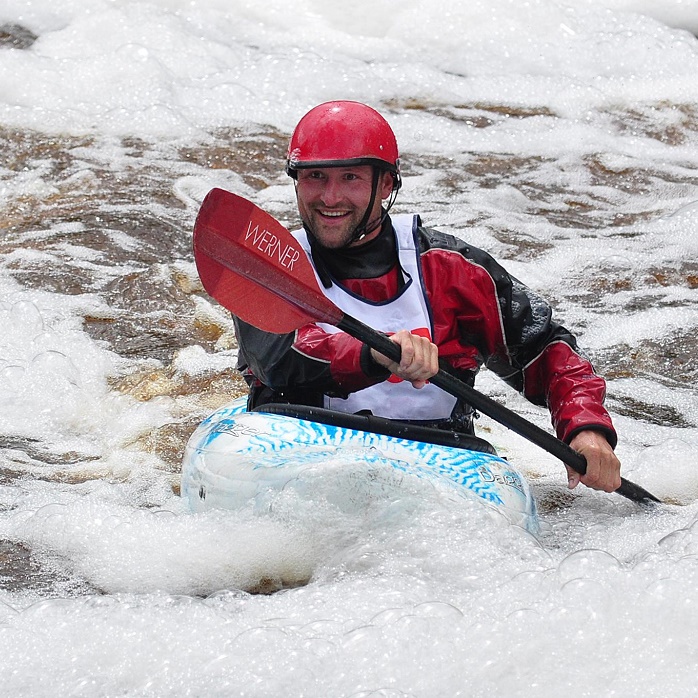 Swiftwater Adventures was founded by Cliff Langley, a self-termed ‘adventure naturalist.’ Cliff admits that this may be a new title, but it suits his lifestyle and goals. He had been a guide and naturalist for the better part of 2 decades, and is certified in First Aid/CPR, Wilderness First Responder through NOLS, and Swift Water Rescue through ACA.

Cliff has guided whitewater rafting and kayaks trips, canoe trips, high ropes and zip-line courses, mountain biking, snowshoe and cross-country skiing outings, and interpretive hikes. His adventures have taken him from the shores and rivers of the Lake Superior region to the Rocky Mountains, to the wildernesses of Alaska and northern Canada, and to the jungles and beaches of Central America. His antics have even been mentioned in Outside Magazine’s 2007 Best Outdoor Towns article.

In addition to being an adventure naturalist, Cliff has written many articles that have appeared in magazines such as Superior Outdoors and Northern Wilds, and many of his short adventure films have appeared in film festivals and on regional PBS stations.

Cliff can be reached at: [email protected]

Born and raised on the banks of the St. Louis River Lucas spent his childhood fishing, camping and enjoying the lakes, rivers and woods of northern Minnesota. As an adult not much has changed.

When not working in the north woods Lucas spends months abroad exploring new cultures and landscapes around the globe always grateful to have such an incredible natural environment to return to.

With decades of professional experience he has guided tens of thousands of outdoor enthusiasts and adventure seekers. This is all part of his ongoing commitment to sharing the best kept natural resources and adventures in the forests he calls home.

Brian has been a whitewater kayaker for over eight years, spending two of those years living in Seattle kayaking some of the finest whitewater the United States has to offer. Having spent the last 10 years pursuing and completing his formal education—while taking as much time as possible for wilderness adventure—he’s aiming to take his love of outdoors to a new level.

Growing up on a lake in northern Minnesota, the water and wilderness have been an integral part of his life since early childhood. His love of the outdoors has manifested itself as a lifetime of hunting, fishing, canoeing, kayaking, sailing, SCUBA diving, cross-country skiing, snowboarding, and generally existing outside.  Brian and his wife, Carrie, enjoy spending time together, exposing and teaching their two young sons, Michael and Collin about the wilderness.

​​
Ryan Zimny truly knows the ways of the Universe—he is a physics teacher! He teaches Chemistry too.

Ryan has been a guide on the St. Louis River since the late 1990’s. As far as happenings on the river: he’s seen it all, done it all, so not much surprises this mad scientist. He looks much younger than his age from the benefits of being a long time paddler, biker, runner, and skier. He enjoys coaching Alpine ski racing and spending time his kids and his lovely wife.

Josh loves paddling and spending time outdoors. Josh is a math teacher and loves to inspire young minds to reach their potential. He has been a guide and trip leader on the St. Louis River for the greater part of a decade. Rumor has it that he is a karaoke addict

Josh enjoys spending time with his wonderful wife and their baby–soon to be toddler!