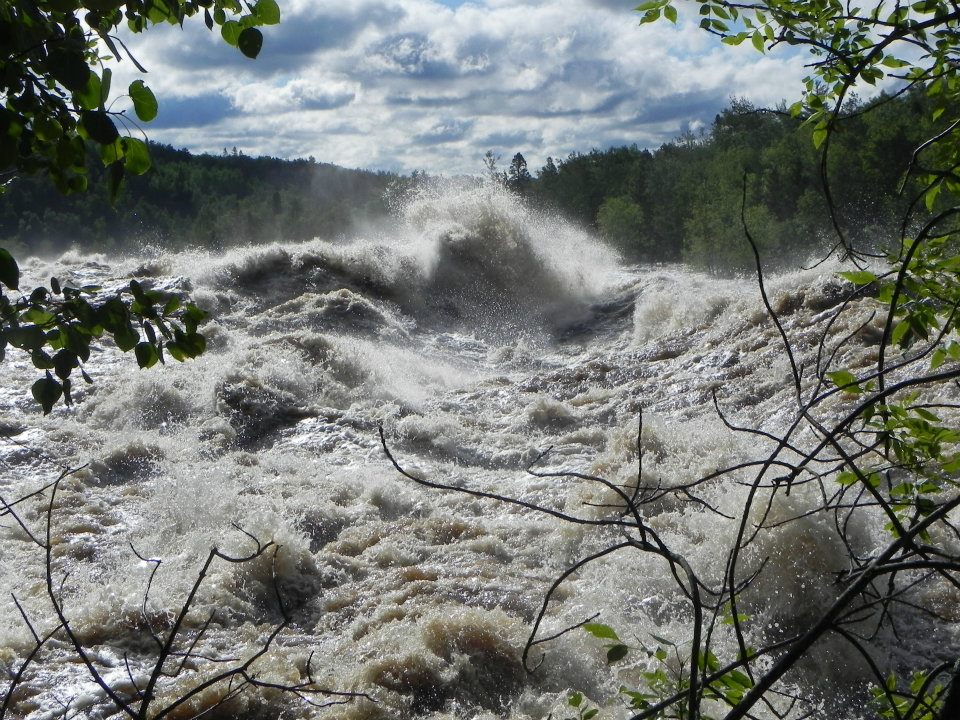 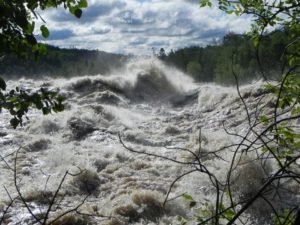 This story was written for the One River, Many Stories contest featuring fiction, nonfiction and poetry about the St. Louis River. The following non-fiction story by Cliff Langley was read and recorded for a University of Wisconsin-Superior Public radio broadcast: http://www.wpr.org/shows/wpr-presents- one-river- many-stories

The story is about expert kayakers and attempting to paddle a river at flood stage is for experts only and requires years of experience, know how and some luck. Nothing done was illegal as the participants hiked out before having to paddle the Thomson Reservoir and be anywhere near the Thomson Dam. Enjoy!

The scene was familiar and foreign all at once. It felt like we were floating in a parallel universe. The river began to accelerate drawing us towards a massive wave, easily 25 feet tall. The immensity of it all seemed surreal as we drifted in our kayaks towards the mammoth wave. We were experiencing the power of nature in one of its rawest forms. At that moment the St. Louis River was unleashed, untethered, and beyond control.

48 hours before, on a late June night, over 9” of rain had fallen with in the St. Louis River watershed. A large basin of over 3,600 square miles was completely inundated in heavy rain. The vast spruce bogs and peatlands near the headwaters were saturated beyond their capacity and every tributary was flooding its banks. Landslides and washouts were common place throughout the watershed.

Below the Thomson Dam, the lower St. Louis River was a raging, seething, death torrent. Huge logs were tossed about against the canyon walls as exploding waves rose and fell tens of feet in a moment. Water was beginning to flow over a section of the highway 210 bridge, typically dozens of feet above the river. The Swinging Bridge was crumpled and twisted, then washed away. It was the peak of what would be deemed as a 500 year flood.

The flood had reached its peak and the extent of the damage had been done. We certainly did not know the cost or extent of the damages caused by the flood at that point but risk to human life had subsided and it seemed that the Thomson and Fond du Lac dams would hold. At this point, being experienced whitewater kayakers, and having paddled the St. Louis at flood stages in the past, we wanted to experience the river’s immensity.

Our past experiences wrestling big water on the St. Louis River was in the 25,000 cubic feet per second (cfs) range—cfs is a means to measure the volume of a river. Above 20,000 cfs the river is considered to be at flood stage. At these flows the Upper St. Louis River had exhibited massive waves and huge holes certainly retentive enough to deal out a beating. You would be lucky to survive if you swam on the Louis at such a flow.

The flow that June 2012 evening was over 55,000 cfs! Experienced big water boaters would advise it is best to stay in the middle of the river at such a high flow to avoid logs in the powerful and turbulent eddies. Additionally, large features, like holes are likely to flush you out in the middle…in theory. So this was our plan for 55,000 cfs run.

Our party of three (Deckhand, Proffessor Z, and myself) put on the river in Scanlon, MN 4.5 miles upstream of the Thomson Dam. The typical whiskey colored water, stained from the tannins released by decaying vegetation in the peatlands upstream, was more of a milky brown from all the sediment.

Once on the river, it was less than a minute before we were doing the limbo under the I-35 bridge. We looked back at the bridge knowing that we had literally passed the point of no return. Now it was full commitment to flowing down the middle of the river. Paddling through the trees at such flows would be death. Big waves were sure to be down the middle and big waves are fun if you are an experienced paddler.

A moment later the current had brought us to the canyon. The previous rapids had been washed out and the river was flooding the forests. A massive diagonal wave some 10 feet tall was breaking off the left canyon wall. We charged into the massive feature then paddled and braced our way through a series of turbulent waves, some over 10 feet tall, tossing us all directions. These would serve as our warm up for the challenge ahead: the Electric Ledge.

The Electric Ledge, at typical summer levels is a fun class III+ rapid featuring a tongue of water that drops quickly into a powerful wave. The rapid is sculpted from ages of water dropping over, into and across the tilted ridges of the Thomson Formation bedrock. The steeply slanted ridges were born from the compressed sediment of 2 billion year old seas, the ancient sediment then was forged into rock through millions of years of heat and pressure into the metamorphic rock known as slate. Tectonic movements from the north and south faulted the bedrock and pushed it up onto itself. At 55,000 cfs these ridges would create gigantic waves and holes. In the middle was the biggest of these waves, a gigantic wave some 25 feet tall and at least as wide.

Deckhand was the first to ascend the steep face of the wave then disappear over the top. Professor Z was close behind, as he neared the crest of the wave the top third exploded violently, tossing him backwards into the air and out of sight. I climbed the wave charging as hard and fast as I could as the wave was about to break again. I fell off the backside of the wave into the air.

The moment of free fall lasted only an instant as a huge wave hit me from the side. The surge immediately sent me 20 feet to the left. The next several hundred yards consisted of huge 10 to 15 foot waves surging and breaking in all directions. Tossing us about like bobbers I could occasionally see Deckhand and Professor Z.

The river accelerated into one last giant, fluffy wave, created from the river flowing over an island that usually stood a couple of dozen feet above the water. Past the last wave we floated and looked at each other in astonishment. We had made an hour long run in less than 15 minutes!

Soaked and stoked, our risk had been rewarded, thanks to experience and some luck. I felt grateful for the opportunity to experience the river in its ancient form. Perhaps similar to its flow some 6,000 to 7,500 years ago as the ice dam that plugged the St. Mary’s broke draining Glacial Lake Duluth. Glacial floods scoured the 2 billion year old bedrock as the Githi-Gami Ziibi drained into Lake Superior, further sculpting the unique rapids and landscapes we see today.

As the first peoples came to these shores had they seen the river this powerful? They had certainly seen and lived with it untethered by dams and other modern technologies and knew intimately its power. On that June evening we road upon the rivers primal scream, a reminder of its old age and youth, and our insignificance in both power and time.

What to Wear Whitewater Rafting on the St. louis River

What to wear on a rafting trip with us is a question we get a lot. As we all... read more

Swiftwater Adventures: What New in 2017?

Ok, a few things are the same: we are focused on offering you the best possible professionally guided whitewater... read more

It seemed different but not out of place to be giving a safety speech on the Lower St. Louis... read more

With another season on tap, we just wanted to share with our customers our commitment to excellence. Now, don’t... read more

Labor Day for most people is a time spent relaxing with friends and family, usually centered around a barbecue.... read more

Flipping the Switch to Highwater

We often tell prospective rafting clients that are looking for an easier whitewater experience when rafting on the St.... read more

The St. Louis River is the largest U.S. tributary to Lake Superior, coursing some 180 miles from its headwaters... read more

Chances are if you decided to click on the link for this blog you might laugh at bad geology... read more

Venturing Outside Your Comfort Zone

Having led and experienced adventures all over the place, I have seen many people forced outside of their comfort... read more